Rhode Island > State > Specialty Lodging > Historic Lodging
Rhode Island teems with history, from the northern Blackstone Valley, where the American Industrial Revolution was born in the textile mills there, to the shores of Newport, with its cobbled colonial streets and 19th-century Gilded Age mansions. Rhode Island historical lodging, including first class hotels, places visitors right at the places where history was made. These RI hotels and lodgings often are luxurious all by themselves, a wonderful place simply to relax and contemplate the passing of time. 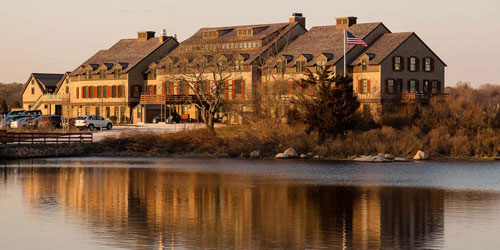 When the Weekapaug Inn says it has a storied past, that’s not an exaggeration. The five-star resort’s saga begins in 1899, when its doors were first opened to guests who wanted a summer retreat on the shore. Rebuilt in 1939 following a hurricane, its location between the ocean and a salt pond made it a highly desirable location. And it still is: The inn’s $20 million renovation in 2012 preserved its past and added luxurious modern conveniences like a pool with a view, a state-of-the-art fitness center, superb farm-to-table dining and an on-site naturalist to lead tours and discussions. Some things don’t change, though: You can still open your windows in your comfortable room or suite to those sea breezes. 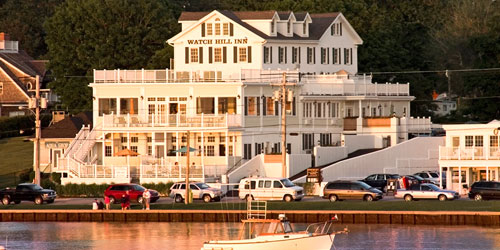 The strong ties between the Watch Hill Inn and its seaside village go back almost two centuries. The luxury resort, which sits in the heart of Watch Hill village, was first owned and operated in 1845 by the son of the village’s first lighthouse-keeper. An electrical trolley system brought guests in over the years. Celebrities followed, from Douglas Fairbanks Jr. and Clark Gable to Andrew Mellon and Henry Ford. The inn, which survived the devastating 1938 hurricane, has been meticulously renovated in 2006 and 2013. Exceptional service, as in the golden age of hospitality, is still a point of pride for the staff. And the inn’s welcoming suites and coastal beauty still serve as beacons to travelers seeking seaside retreats. 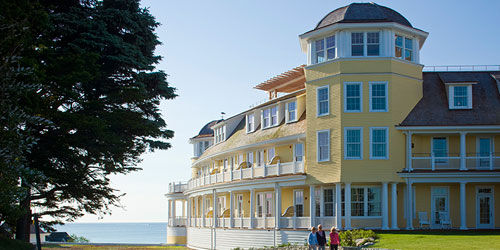 Accolades like its five-star rating from Forbes and AAA are nothing new at the Ocean House beachfront resort: Guests were raving about the location and service at the grand Victorian hotel back in the 19th century, when it was the premier place to experience the quintessential New England summer. Today’s resort has been meticulously reconstructed to pay tribute to that storied past. Rooms are furnished in turn-of-the-20th-century decor, with custom wooden furnishings and early New England artwork. Added modern amenities include wifi, soaking tubs, private terraces, 400-thread-count embroidered linens and plush robes. But the room views are still the spectacular selling point, whether it’s of the Atlantic, Little Narragansett Bay or charming Watch Hill Village.