Shellfishing is easy, fun, and tasty adventure for children and families

The popular shellfish of Rhode Island (and subject of many jokes) is the quahog (also: quohog or quahaug), the shellfish used by Natives to make wampum. Outside Rhode Island quahogs are usually called hard-shell clams and people often say they are going clamming or clam digging.

In Rhode Island, shellfishing licenses are issued by the state Department of Environmental Management Division of Marine Fisheries (402-423-1923). People must apply by mail, using application forms on the DEM website. No license for recreational shellfishing is required for RI residents. Know the local rules on catch limits, size limits, and allowable tools to use.

Non-residents over age 12 must have a shellfishing license. This annual license is $200 and it is active from March 1 to February 28. Non-residents also may buy a 14-day tourist license for $11. For information on sizes and catch limits call RIDEM Division of Fish and Wildlife at 401-423-1920. For information on pollution and closures, call RIDEM Division of Water Resources at 401-222-3961. 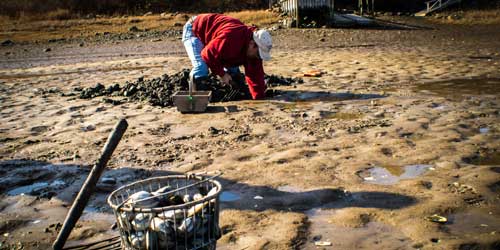 An extension of the west end of Fales Road, off Hope Street (Route 114), this right-of-way is a concrete ramp leading down to a cobble beach on Narragansett Bay. It is popular for shellfishing

A shellfishing license from the Town of New Shoreham is required for anyone age 14 and older to take any shellfish from the Great Salt Pond. Licenses are issued for New Shoreham taxpayers and for summer visitors. Any person may obtain a seasonal license valid from May 16 through October 15. This license is offered on a weekly, monthly and seasonal basis. Shellfish taken under this license cannot be offered for sale or trade. Any person 65 years of age or older may obtain a golden shellfish license for $1. Email: harbors@new-shoreham.com

On the southeast shore of the Great Salt Pond, this fishing location is west of Corn Neck Road. It has a salt marsh and beach. Shellfishing is a traditional use of this site by local people. There is room for parking about 10 cars at the boardwalk.

This state-owned parcel is parallel to the east side of the Quonochontaug Breachway. Parking is available at the end of West Beach Road for cars and boat trailers. Boating here is very dangerous due to swift currents running through the breachway. This site includes a RIDEM shellfish management area.

The bridge over the Harbor Pond Channel, this site has traditionally provided public access for fishing, scenic enjoyment, and shellfishing. No parking is available.

Located off Seapowet Avenue, this refuge area includes a variety of coastal habitats.There is a parking area along a cobble beach north of the bridge over the Seapowet River and walking or driving access to Seapowet Point. There is a marsh on the point, popular for shellfishing. There is also a small gravel boat launch ramp south of the bridge that provides access to an extensive salt marsh and tidal creek area. go to link and scroll down to "Seapowet Marsh and Point Fishing Area."

This site is used often by the public for shellfishing, fishing, kayak launching and walking. A town shellfishing permit is required (see above). Area closed to shellfishing from May to October.

A long narrow beach hugging Potter Cove can be reached by stairs descending from the parking lot. Clamming and fishing are popular activities here.

Point Judith Salt Pond -- and in particular the East Pond tidal flats -- supports a commercial and very large recreational shellfishery for clams, quahogs, as well as oysters and scallops in season. The north-south pond extends from the urban center of Wakefield at the head of the pond to the port of Galilee at the mouth of the pond.
Access from Galilee: Follow signs on Route 108 South to the Block Island Ferry. Park along Galilee Escape Road, the main road leading into the village. Walk down to the watery mud flats that have been exposed by low tide. Usually this area will have several groups of diggers.